Mobile manufacturing company Asus have come up with a special valentines day offer. The offer is valid exclusively on Flipkart.

To buy the phone you can visit the Link.

To mark the occasion they have come up with an ad.

It’s been a long time since I posted. Lots of water has flown down the Ganges since then. I moved out of WordPress to come back to Blogger. I have a hyper active kid who loves shutting down my laptop. I have put on oodles of weight etc.
Crux of the matter is I had plain gotten lazy. I am trying to get things back under control and get back to blogging. To start with, it shall be my regular blog that comes back to life first, followed with maybe my tech blog and lastly my stock picks… All that I am now left with is hope. I would be trying to retrieve my older posts and put them back up here. Until then all that I request is patience. 🙂

I started going out for a jog since yesterday. A lot of my friends had been advising me since long that I needed to shed the weight that I had put on really badly! After taking into concern these weighty issues, I finally relented. And guess to whom I relented. None other than my mom!
Now that I have started, I guess there is not much I can do to wriggle out of this situation. Mom is really adamant and upset at me this time round. In fact I was to start going out for this jog since Tuesday itself. Somehow I managed to save my lazy self from the torture that day; but at what cost? Mom did not talk to me that whole day! Women and their black mailing power! There is no way you can save yourself from them.
These two days, that is yesterday and today that I went out for a jog have weighed themselves very heavy on me! My body aches and cranks like a car right out of the 1950′s! I have literally been dragging my feet to every place I go. The effect has been so profound that I have suddenly lost the appetite to crank up the accelerator on my bike too! I now drive like an uncleji from 80′s would drive his faithful Bajaj. It’s a different matter of fact that I own a Bajaj bike too! Now all that is missing is a retro helmet. Looks like it is time again to pull out my Radio City retro helmet that I had won a few years back! Duh! I so very hated it!
Friends are just round the corner! Time to go for lunch. Catch you all laterz!

I will try and post a pic of me if ever I do reduce my body weight!

Kaboom! Bang! Crash!
I was lying on the road! People started to crowd around me. My eyes were getting heavy, I closed them. That’s all I remember of the incident. Next when I opened my eyes, I was in an unknown place. There were no people crowding over to see me, no commotion and no noise. There was an eerie silence all around me. I thought I was dead! Shit! How could I be dead so soon?? God! You can’t be so very harsh on me!
This place that I was at, it looked like heaven. This was a posh place. I could bet all my money, that’s if I had any in heaven that this place had to be heaven. It had everything that one could think of. The place or room, whatever you may call it, had all the modern amenities. Heaven looks far more advanced and posh to me. There was a deck of CDs lying in front of me, or rather, to my right. They were amongst the finest collections that I had seen in times. I was on a bed and it felt too comfortable to be true. There were two bed lamps on the either side of my bed. A book shelf adorned one corner of the room. I could not make out what books they were. A study table lay next to it, a table lamp still glowing. The chair was drawn back. It looked like someone had just got up from there. The other corner had a large window. It was heavily curtained. Moonlight peered in, softly illuminating the bedpost at a corner. Light breeze blew in from there chilling the place. There was no one in sight until now.
There was a searing pain in my right hand; I tried lifting it but found it heavy. It was then that I realized that there was a plaster on my hand. Wait a minute… did I say a plaster? Holy Gods! I was not dead! The dead don’t have plasters on them! Well they may have one in their grave, but in heaven? That was out of question.
I felt the sudden urge to get myself up in a seated position. I turned around and tried getting up. That was when I heard her for the first time. “Please stay lay down; at least for a while.” I looked around to see where the voice was coming from. It was a sweet voice and it fell like manna to my ears. The only source of light in the room was that of the table lamp that lit place faintly. The moon looked at its prime, but then there were curtains that let in very little light. I could see some one moving in faint shadows.
From what I could make out of the shadows, she was in a pair of pajamas. The room suddenly filling up with a sweet smell of flowers as she drew closer to me. I turned around and flicked on the bed lamp. The room was filled with more light. She stepped out of the shadows into the light, her face still shrouded with darkness. She wore a pair of red satin pajamas, small flowers scattered in print all over it.
“My back is sore from lying down for long. I need to be seated.” She was much closer to me now. I could see her slender hands extend towards me as a gesture of help. I declined the offer and got into the seated position. She drew the only chair that was in the room closer to the bed and sat down. I could see her clearly now.
She had a flawless skin and was dusky. Even in the limited light, her dusky self reflected enough light to put a mirror to shame. Her features were very well done up. It looked like as though she was the creation of an artist’s art. Her lips wore a bright red color. I am not sure if they were painted red by a lipstick or were a natural. Her eyes looked like two small gleaming candles. A straight nose and equally straight hair. In short, she was very beautiful, a feast to the eyes.
While I was admiring her beauty, somehow a puzzled look crept into my eyes. I am not sure if it was so very visible, but she immediately sensed my confusion. “I was the one who banged into your bike this evening. I was at a very high speed and the collision sent you flying over the head. You fell unconscious there. I could not leave you there for the dead and run because I am a doctor myself.”
It all started coming back to me. I had had a wonderful day at work today. I had just been promoted. I had had a great appraisal. My life that day looked perfect to me. I had been humming my favorite songs while I was riding back home. I had stopped at a junction for the signal to clear. The road behind me and ahead of me had been clear. I could have gone ahead, but… anyways.
I tried to open my mouth to ask her something, words failed me and my throat was dry. I squeaked. “Water.”
kuch baatein ankahi si,
kuch anjaan lamhe,
thodi si masti, thodi si khusti,
Bas yahi to hai dosti! 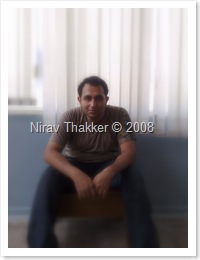 I had long been intending to move my blog out of blogger and host it on a separate host. This week I finally did that. I have finally moved out of my Blogger account and created a self hosted WordPress blog. All my old blog posts that you were used to seeing on my other blog are here. So you would feel absolutely at home. In case you have subscribed to my blog using my feeds or by email, don’t worry that you would have to subscribe over and again. If you are seeing this post on your reader or in your mail, you already have been pointed to my new blog. Just update your bookmarks to point to my new site. I would continue to post my updates and ramblings as often as I can. Sometimes in bulk, like in the past few days, or sometimes in moderation, like it was a few months back; but I promise to keep you entertained for sure.

Till then its time to wrap off for now.

We were at this Restaurant the other day and i was feeling naughty! Well, I remembered seeing another blogger having created a movie using the time lapse technique to capture photographs and place them in a time line! I did just that! 🙂 now i would be glad if you left your comments and suggestions to improve this video or my future captures! 🙂 well, the Character Artist, Sandeep Bansal, happens to be my colleague and a good friend! 🙂

A new life needs to start for me,
One that is happy and glee!
Leaving the past behind, moving ahead,
Leave no road uncovered, take care at the bend!

You shall encounter rocks abundant,
May be even stones on your pavement!!
Care not for them and cruise ahead,
Life calls you with its arms spread!!

It is very unwary, very cowardly vice,
If I decide to give up than think twice!!
A new somebody awaits me,
Somebody whose love shall be true to me!!