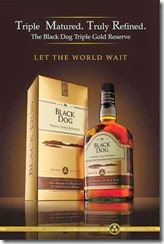 Like the sun is incomplete without the moon, dog without a cat and a watch without its tick tock; a fine scotch is incomplete without maturing. After the whisky has been distilled, all that we have is freshly distilled spirit. Much like having freshly made wine or beer. The process of maturing a whisky was an unknown art and was discovered by accident. Back in the old days, casks were merely used as storage containers and nothing more. While a major portion of the spirit was consumed in a quick span, owing to continuous manufacturing, a few casks here and there would remain unused and lie there until somebody would discover them. I am sure, the scot who must have discovered must have been the happiest in a drunken stupor.
Lot of factors play a pivotal role in the preparation of the whiskies. Malt, Grains, Water, Weather, storage conditions at the warehouse to name a few. Of all these, the storage in wooden containers is what is the most important. Whisky without its woody flavor would remain just freshly manufactured spirit. It is the aging in wooden casks that add to its now so known and acceptable flavor. While storing in wooden casks is important, not all and sundry wooden casks can be used. The finest scotch can be matured only in either an ex Bourbon cask or an ex Sherry cask. Even the wood that is used for these depends and is carefully selected.
While completely fresh, virgin casks, known as fresh oak casks were popular ages ago, it was a completely known fact that the strong flavor of wood in such casks would actually over power all other flavors and leave a lot to be desired. These were hence lesser in circulation. On the other hand, USA had a rule that none of the Bourbon casks could be used more than once. The thrifty Scots bought these casks for their finest whiskies and stored the spirit in them.
A lesser known fact, again accidentally discovered by the Scots was to use the discarded Sherry casks. These casks are made out of ‘European Oak’ and are known for their distinctive flavor. Back when the alcoholism in Britain was on the rise, several casks of Sherry which was imported from France would lie thrown and strewn around as litter. This was picked up by the Scots at a friendly price and the same would be used to mature the Scotch.

While nearly about 90% of the Scotch ends up in a Bourbon barrel, matured Sherry scotches like Black Dog’s Triple Gold Reserve makes them a much sought after commodity. Sherry casks are usually larger than bourbon barrels and come in several different sizes. A HOGSHEAD holds 250 liters, while a BUTT is twice that size with 500 liters. Distilleries sometimes use other sizes (like the 450 liter PUNCHEON) as well, but the vast majority of the casks are still barrels, hogsheads & butts. 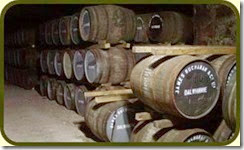 These days, both bourbon and sherry casks are used more than once. A sherry cask that has seen four or five fillings is no exception. When a cask has held and aged whisky for the very first time it’s called a FIRST-FILL cask, after a second filling with fresh whisky it’s a SECOND-FILL cask, etc. With each filling less and less character is transferred to the whisky. Depending on the pedigree of the cask it will become ‘exhausted’ after a couple of fillings.
There are various wood effects. Sherry casks impart winey and raisin notes to a malt, and port casks even more so; bourbon casks tend to produce soft, sweeter malts with vanilla tones and fresh wood. Keeping the tradition of delivering the finest scotches, Triple Gold Reserve is a pedigree whisky that not only uses advanced maturation patterns, it also ensures that every Triple Gold Reserve is truly worth its name.
Pictures and reference: http://www.maltmadness.com/malt-whisky/beginners-guide-05-maturation.html