The Generation X as we were known as when we were still the baby boomers, has come a long way from where it was in terms of choice. No longer is the generation held back by the old adage that parents know the best for you and that following the parents footsteps was the right way (to heaven). 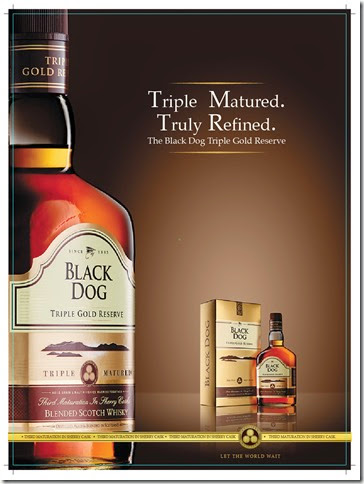 The generation was filled with rebels. A generation of people who thought on their feet, changed jobs often and demanded more money. It was but natural that with time, the other choices, food, Scotch, friends, jobs… everything would change. It was at this time when Black Dog stepped in to fill in the void that the generation had in terms of the best scotches available with its Triple Gold Reserve. A scotch that has not only done it before, but continues to still influence and be the best around.

At a time when most of the matured scotch whiskies around the world have been consumed, the only options left are the less matured scotches. Black Dog’s Triple Gold Reserve fills this void that has been left by the distilleries world over who did not see such a day coming. Considered at par with almost any 12 Y.O. scotch, this is one that is equal only in terms of age but surpasses in all the other matters!

I discovered a clever poem from the Bard of Banff, Stanley Bruce, to help you remember how to spell the word and what to look for when shopping for an authentic bottle of Scotch.

A Scotsman who spells

should be hand cuffed

and thrown head first in the Dee,

In the USA and Ireland,

So if you see Whisky

if you get it for free!

For the name is not the same

and it never will be,

a dram is only a real dram,

from a bottle of ‘Scotch Whisky’.