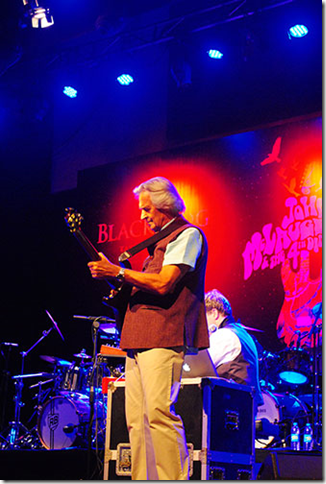 John McLaughlin was in India and I had to be there. There is something mesmerizing about this idol of mine who is spiritually very Indian! He performed in Chennai on the 4th of April, 2014 and Mumbai on the 5th of April. Luckily enough I was in Chennai on the night of the 4th of April due to an official meeting. Travel was never a prerogative to me but then since I was there, I managed to source a pass through a friend who was in Chennai already. I had to pester and butter him before he actually agreed to go across and get a pass for me. Online, all the passes were sold out and there was no way I could have gotten in. VIP pass was what the need of the hour was and he managed it for me.

The event was sponsored by Black Dog and known as Black Dog Easy Evening with John McLaughlin and the Fourth Dimension. This was his first tour in Asia in the last 5 years and with his longest standing band – The 4th Dimension, featuring multi-instrumentalist Gary Husband on Piano and drums, bassist ‘extra-ordinaire’ Etienne M`Bappe, and powerhouse Indian drummer Ranjit Barot.

The event, sponsored by Black Dog Easy Evenings, meant that patrons and connoisseurs would be lapping up an evening of refreshments and straight-up jazz fusion. The mini-bar set up by the event sponsors, serving the all new Black Dog Triple Gold Reserve, sure did keep spirits alive. But absolutely nothing could steal the limelight away from these legendary showstoppers who were about to mesmerize us for the next few hours.

In his usual playful self, McLaughlin set off, digging into his setlist. Since the band is currently touring for their latest album, The Boston Record, Saturday’s set was packed with many compositions off the album. His guitar yielded the deepest and most intricate of jazz scales moving from ‘Raju’, ‘Little Miss Valley’, ‘Senor C.S.’, etc. to ‘Abbaji’ and many others. ‘Abbaji’ had Ranjit Barot stepping in on vocals, with backing vocals provided by the rest of the members. It was a confluence of several kindred spirits – not just genres, but different emotions as well. A land where the soulful, yet, turbulent sounds of the electric guitar meet the bouncy rhythm of the bass and the fluid, clinking keyboards – all held together by the percussive, pounding notes of the drums.

While their set came to an end, the band bowed and exited the stage, leaving the crowd hungry for ‘that one encore song’. People just refused to vacate the auditorium. I am sure McLaughlin hit those notes on the first chord, and somebody in the crowd yelled, ‘You Know You Know’…. What next? The shrieks wouldn’t just stop for the next few minutes. The next four minutes was a roller coaster ride back in the 70’s, when I wasn’t even born, after which they finally exited the stage.

I was so deep in my thoughts that before I knew it, I was back at the hotel with thoughts about work filling me up deep!